February 7, 1986 was the day that dictator “baby doc” Duvalier was overthrown in Haiti. To mark this occasion 33 years later and call for the resignation of Haiti’s current president the Haitian people have come out in force. Inflation continues to rise out of control (the gourde is now 82 up from 65 this time last year) and corruption plagues the government who has not been able to satisfactorily account for US$3 billion in the Petrocaribe deal. A call to action was made last Thursday where thousands of people protested on the streets of Port au Prince. 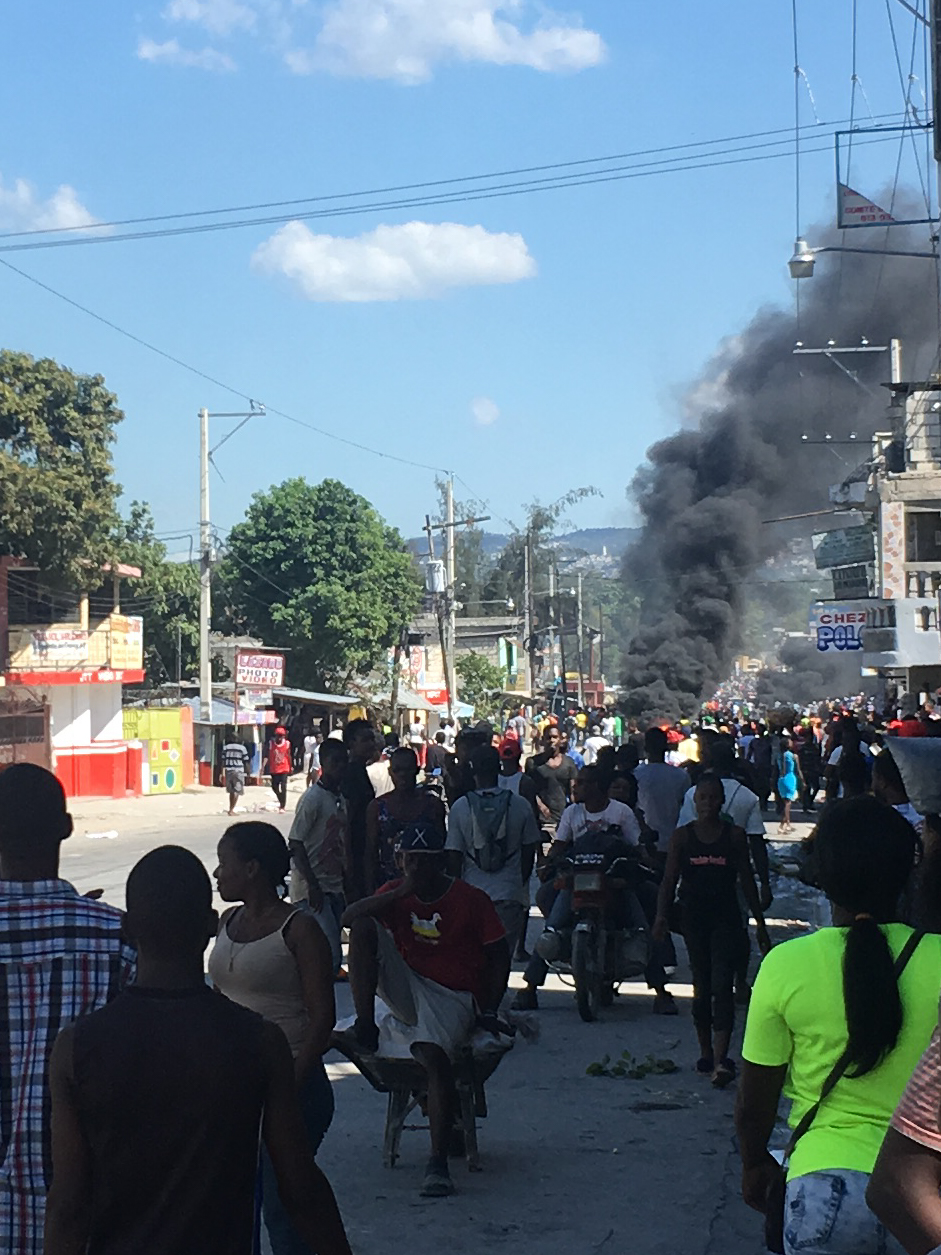 Manifestations Sabbath afternoon in front of the church 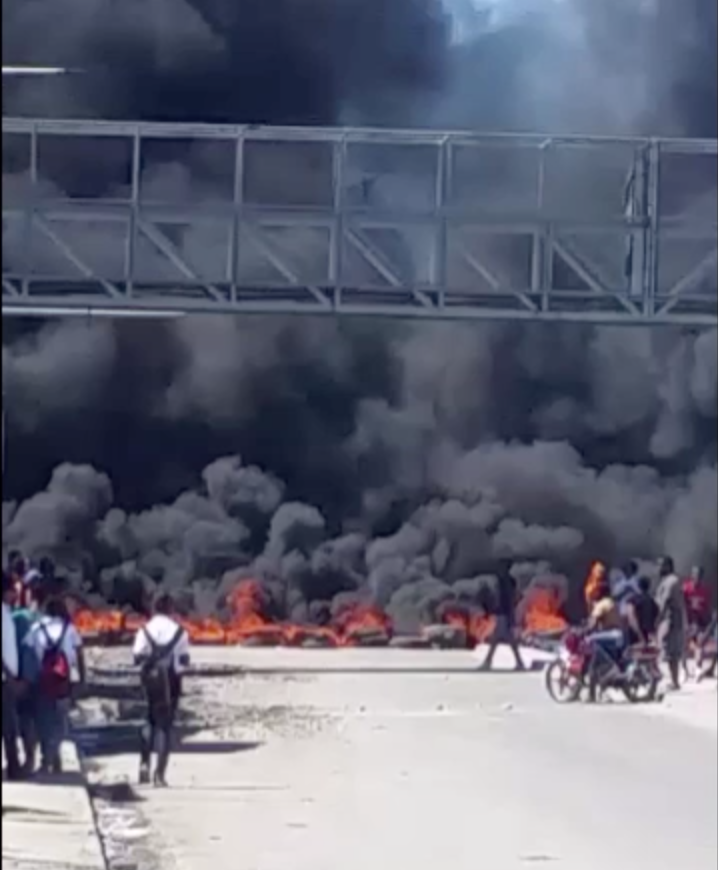 Entrance to Carrefour on Saturday

This paralyzed all transportation and most businesses. Our patient census is very low and patients are not showing up to clinic as there is no public transportation and it is impossible to safely travel even relatively short distances. On Friday there was a reticent return to normalcy. And Saturday, things seemed to start out relatively normal and then at midday, chaos erupted on the streets of Carrefour with fiery roadblocks and a large mob of angry citizens making their way towards central Port au Prince. Our hospital is located near the main road connecting the entire southern part of Haiti with Port au Prince. This thoroughfare is a favored area for disrupting commerce by creating roadblocks. Tension continues to mount. In spite of all the disruption PAP airport has remained open. This morning we had to make a trip to the airport. We went in the ambulance and I wore hospital scrubs and my badge. Most of the demonstrators kindly let us through, but on the way home at 7 am many more roadblocks had been created. These are made from any combination of rocks, tires, branches, furniture, trash, overturned cars and fire.

In spite of burning tires and the sound of gunshots in the distance no one should worry much about our personal safety or discomfort. Many people cannot get food and fuel because of the disruption. Delimart has been closed and barred up most of the time since Thursday with the Haitian militia protecting it. For those of you not familiar, Delimart is our local food source outside of the fresh food we buy from street vendors. The owner of the Delimart chain is thought to be a supporter of the president and thus it is particularly prone to looting and mass destruction unless proper measures are taken. If the market does not open up again soon I might be eating canned garbanzo beans for breakfast! But I doubt I will suffer any serious hunger. All petrol stations are still closed and motorcyclists are being stopped by gangsters to make mandatory donations of gasoline to fuel their fires. Our diesel reserves for running the hospital generator are down to the last day. (city power only arrives at night for a few hours) The maintenance crew was able to rally up a 55 gallon drum of diesel yesterday to keep things going at least until now. We have powered down air conditioners and are only running essential systems. 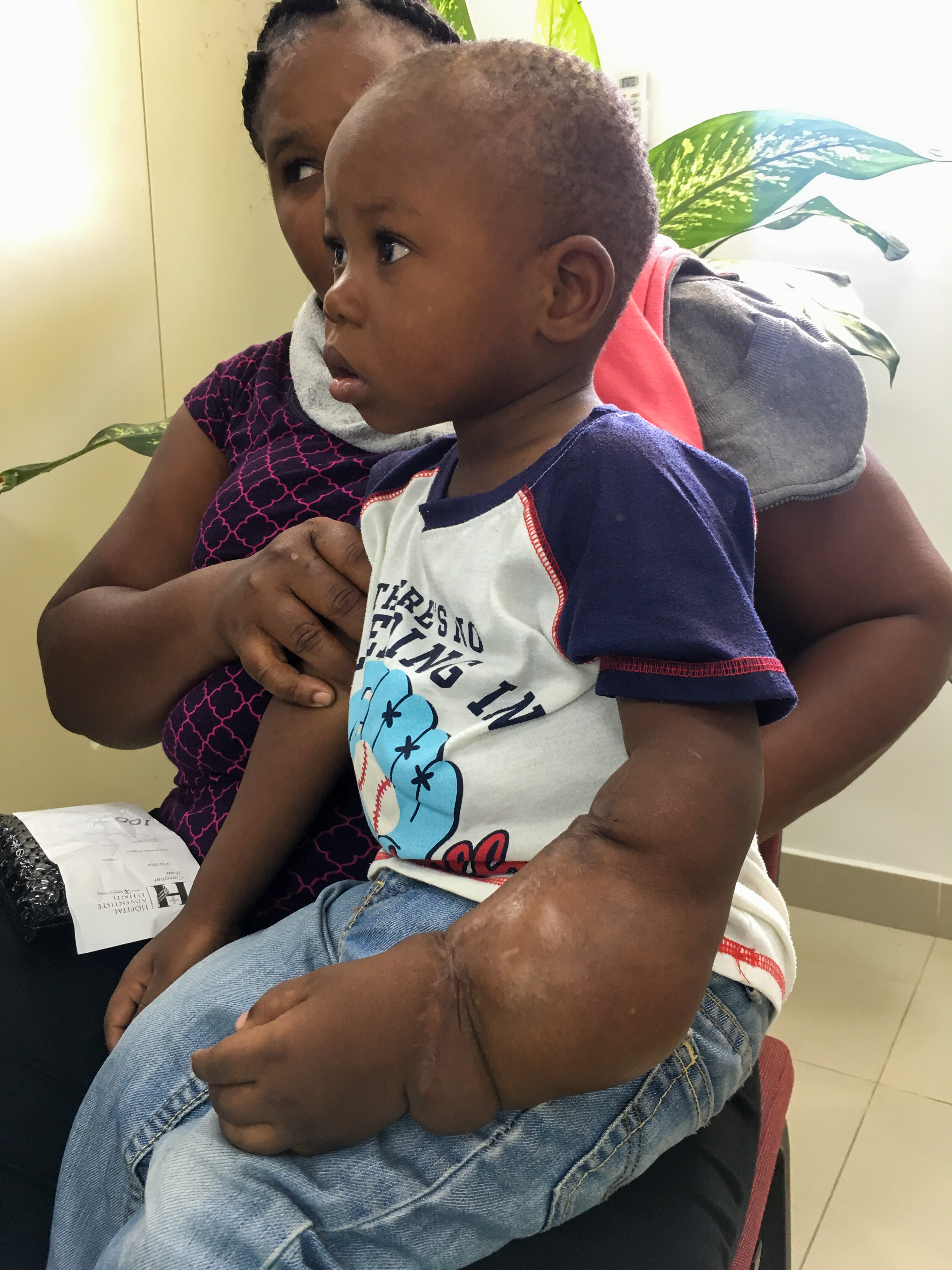 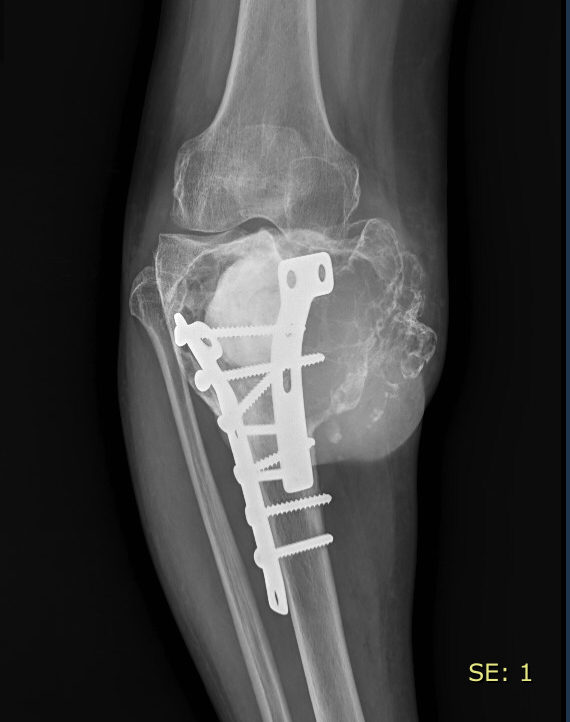 In spite of turmoil great things are also happening. Rozanie is a 57 year old lady who had a tumor removed from her right knee in 2011 at one of the best hospitals in Port au Prince. This was a giant cell tumor, this is benign but is known for its tendency to recurr. When she presented to me several weeks ago the tumor had recurred and totally destroyed her knee creating a large visible mass. I texted my friend Lee Zuckerman who is an ortho tumor specialist at LLU to ask if he thought amputation or fusion would be the best option. Of course he recommended a $25,000 total knee mega prosthesis! But unlike other first world advice that I sometimes get, he said he would get Onkos Surgical to donate the prosthesis and come down to do the case. That same day a couple hours later I met Wilthur a 2 year old who had a tumor (lipofibromatosis) removed from his forearm and it was now bigger than ever. I sent a photo to Dr. Z and we scheduled both cases for February 6. He flew in from Los Angeles the day before and left the day after. Both cases came quite close to cancelling after he arrived… which would have been tragic. Rozanie was anemic. We had ordered blood for her, but the situation with blood here is a long and complicated story. Her blood type is O Neg which is present in only 7% of the population. In spite of trying to get blood during the 2 weeks prior, the Red Cross was unable to accommodate. We did the calculations and promised ourselves not lose one drop over 600cc of blood, which gave us a small margin for safety. The case went perfect and she ended up only losing 300cc. 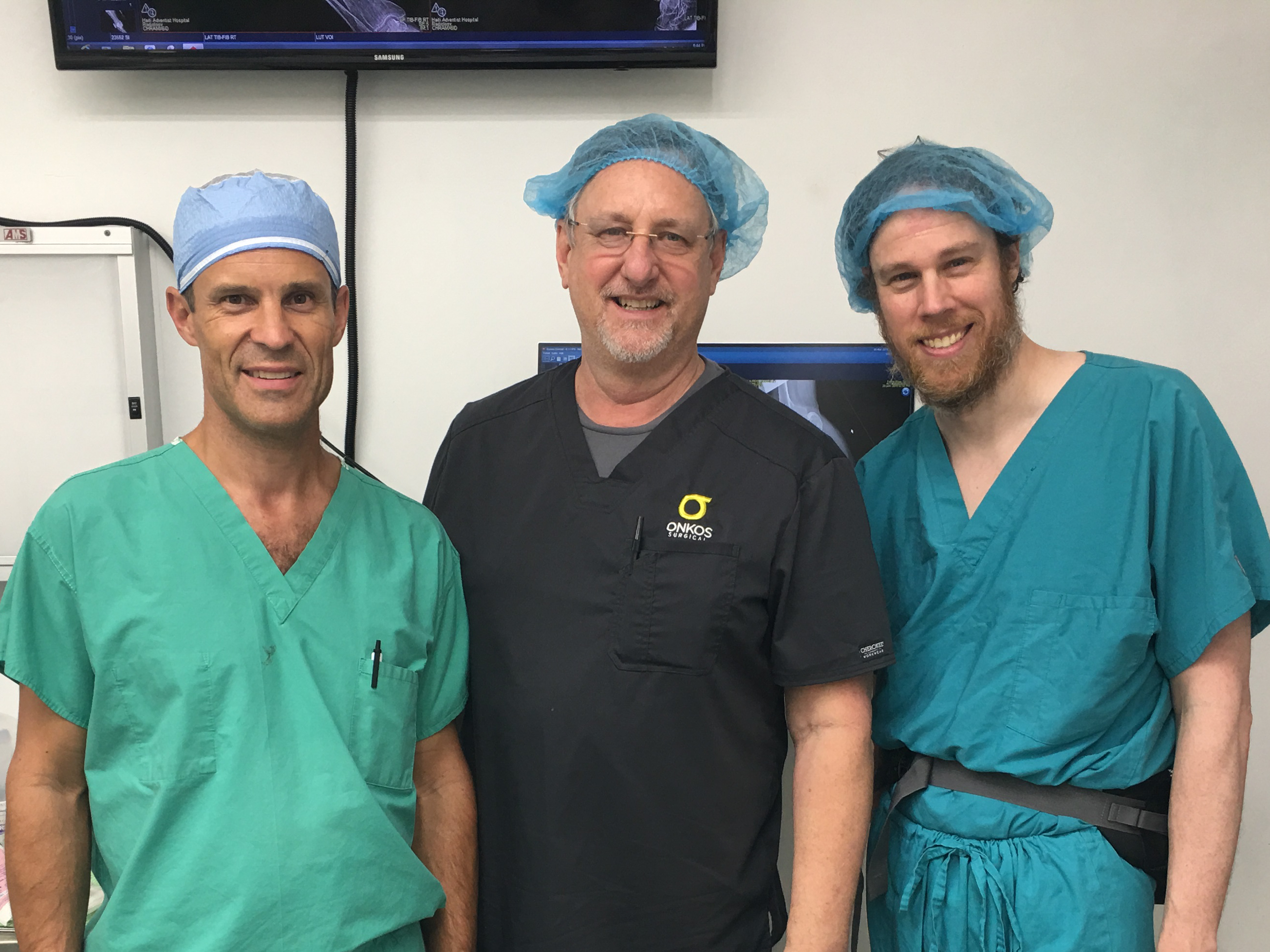 Dr. Zuckerman and Charlie the Onkos rep were able to catch the first flight out Thursday morning before the “manifestations” went into full effect. Subsequently Rozanie has recovered beautifully and is getting some extra rehab while waiting for the street scene to calm down. 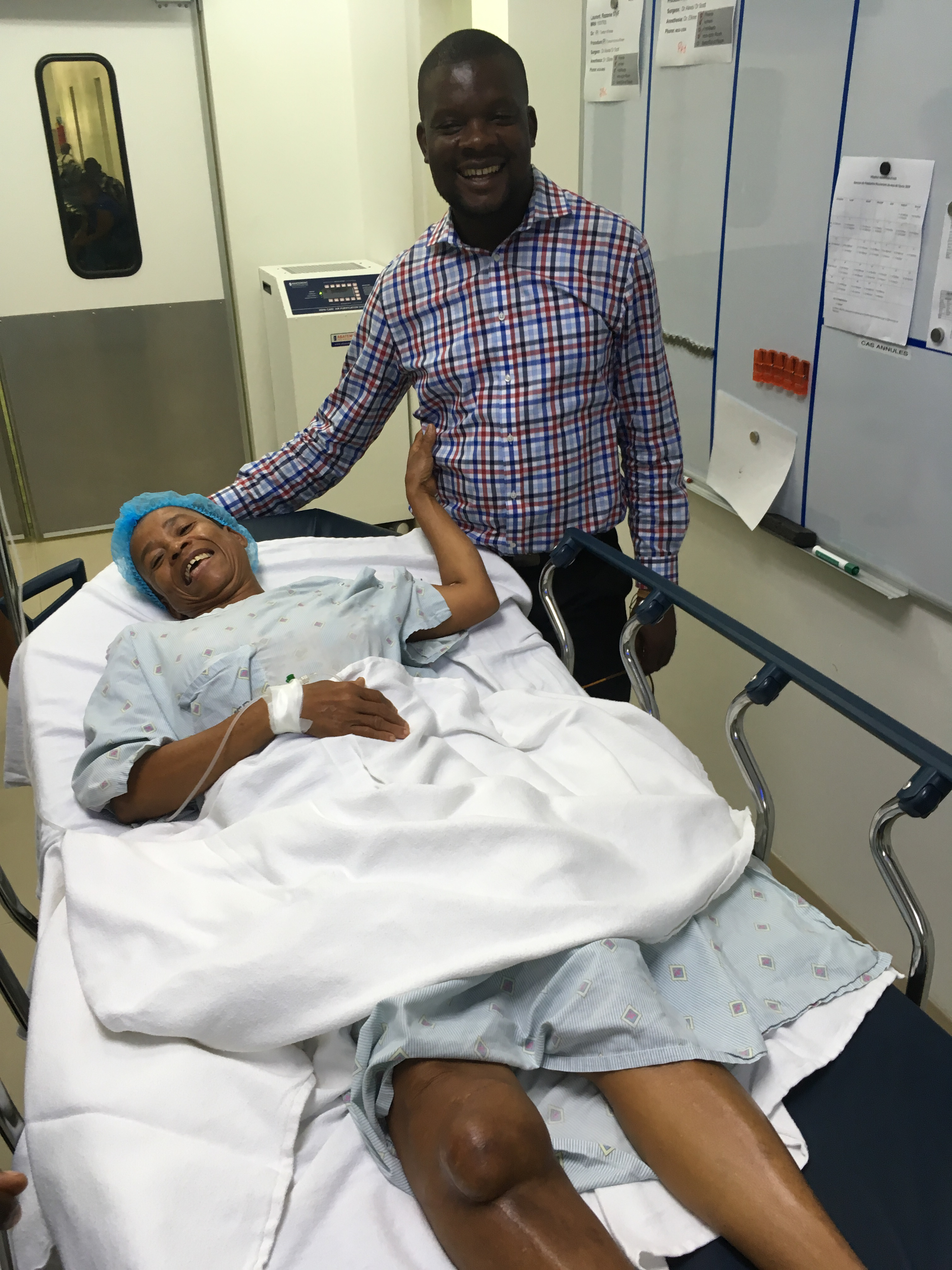 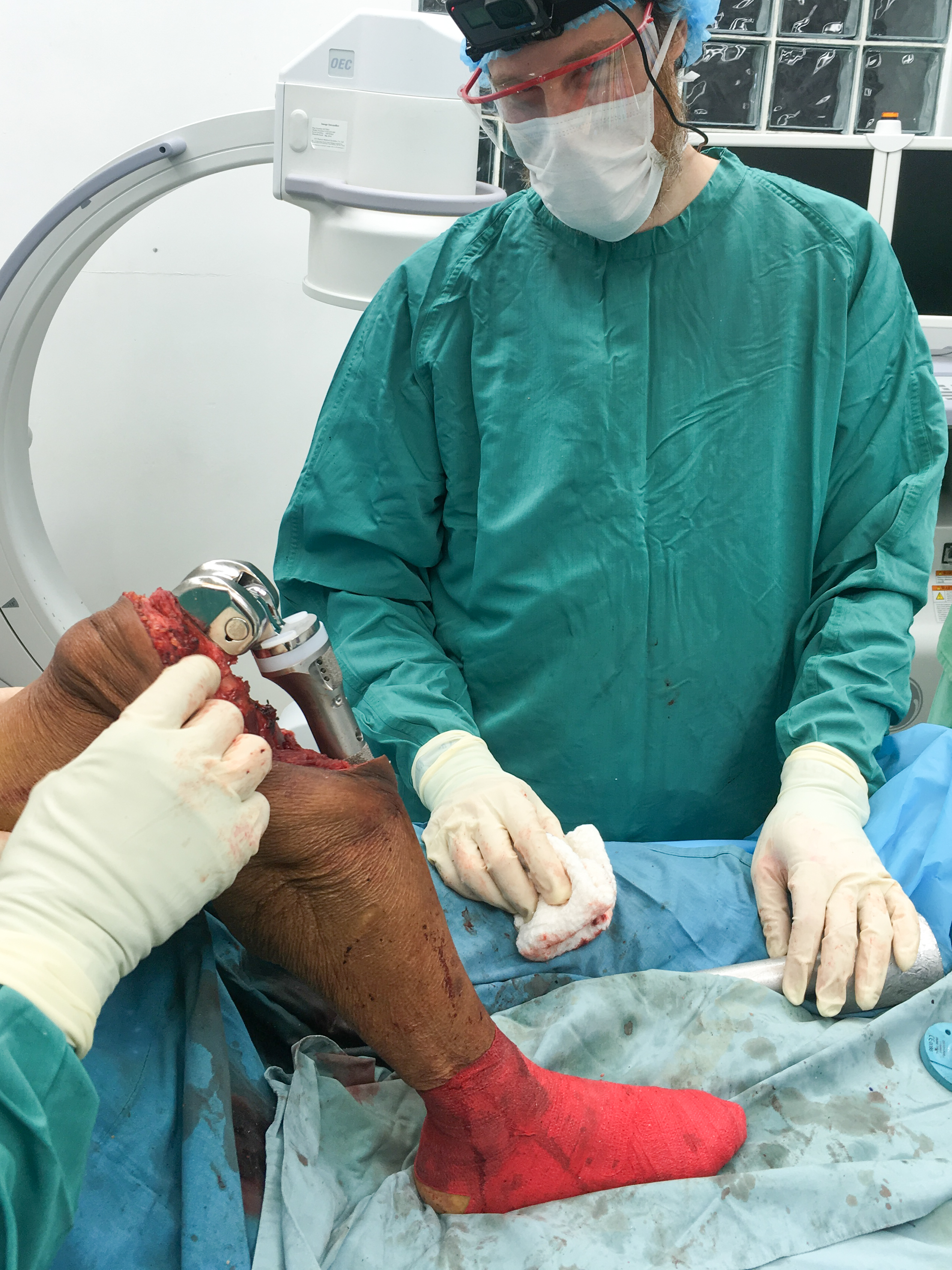 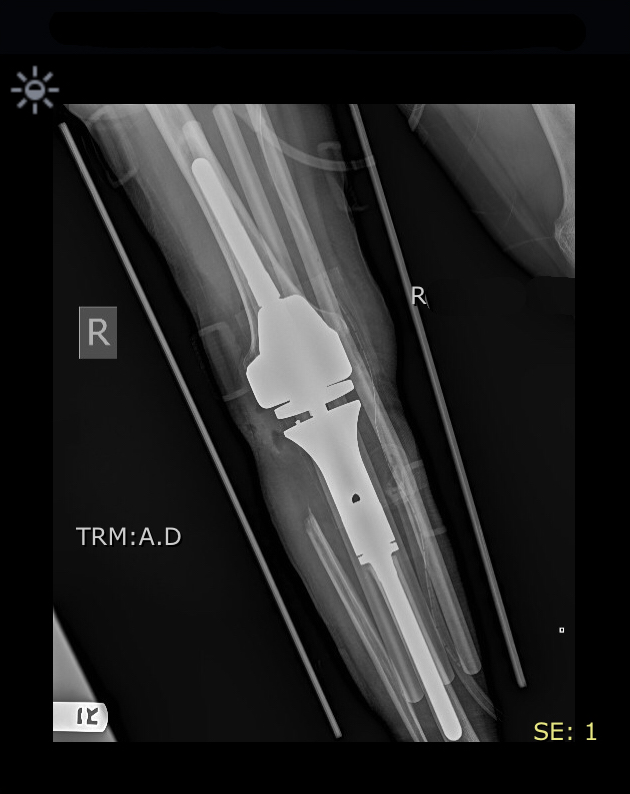 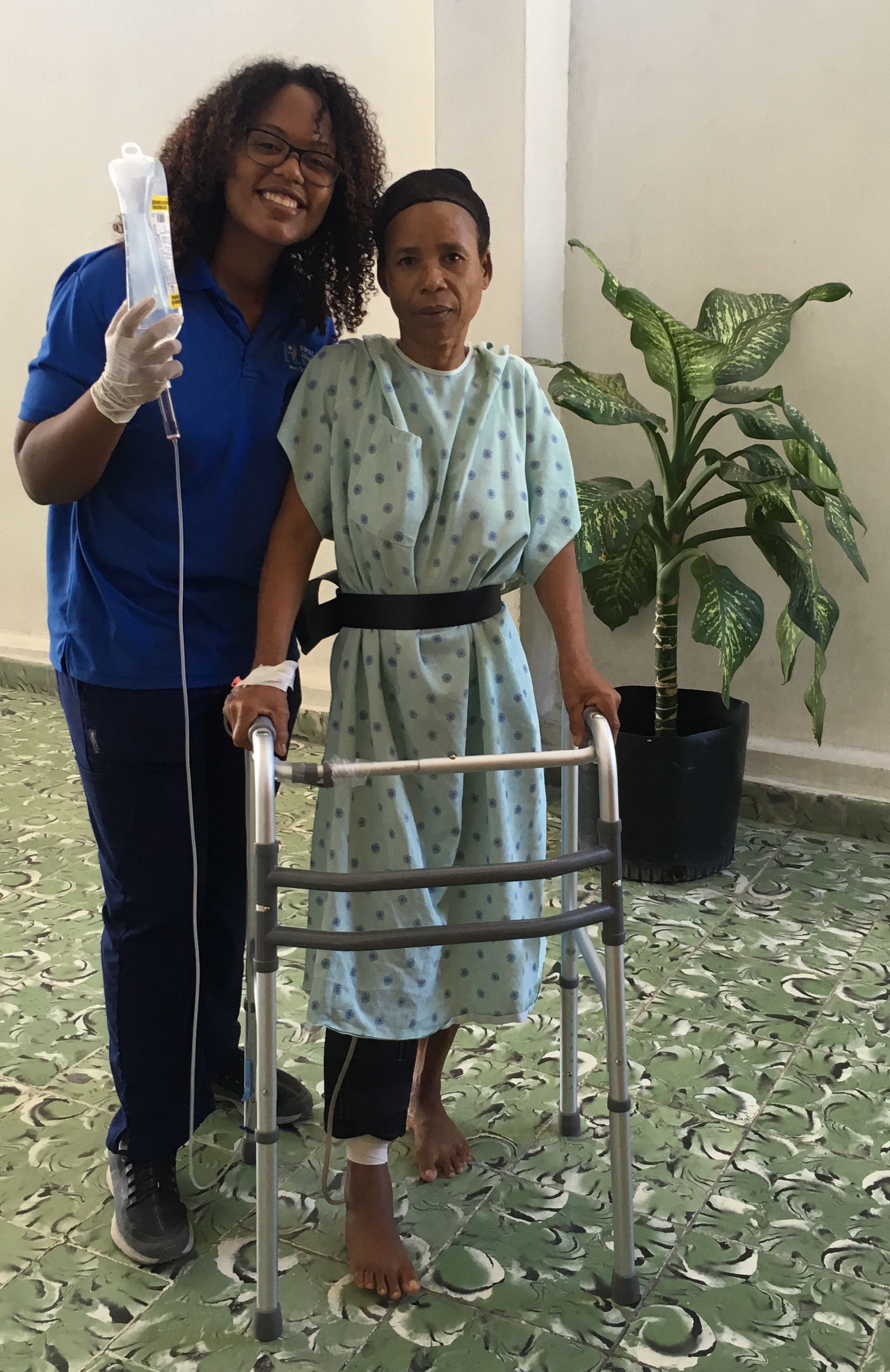